Each year during our annual conference and AGM, UMNB presents awards to municipal elected officials and volunteers as nominated by our membership. To nominate someone for the Louise Breau Memorial Award or the Raymond Murphy Memorial Award, please submit a half- to one-page piece on your nominee, detailing some of their history of service and biography to info@umnb.ca for consideration by the Nominating Committee. Your nominee can be:

We congratulate and thank the recipients for their dedication to municipal public service.

The Raymond Murphy Memorial Award was established in 2017 in honour and memory of our past President, Executive Director, and friend Raymond Murphy of Rexton NB. Raymond was a man who loved his community deeply, and who devoted his whole life and his whole heart to public service. His legacy lives on in the lives he touched, the causes he advanced, and the community he made better through his efforts. This award is presented annually to a member municipality volunteer, elected or non-elected, who has shown outstanding dedication of his or her services to their municipality.

2021 Recipient: Ann Seamans, former mayor of the Town of Riverview. Mayor Seamans broke barriers as the first woman elected mayor in the tri-community area of Riverview/Dieppe/Moncton, received the Queen Elizabeth II Diamond Jubilee Medal, was named an RBC Woman of Distinction, and has served her community for more than 23 years.

2020 – Gerald (Jerry) Gogan, Mayor of Petitcodiac with 31 years on Council, Chair/Member of over a dozen Boards of Directors, mentor, recipient of the Queen’s Golden Jubilee Medal for Community Service, who has both “been involved in almost every good thing to come out of the Village of Petitcodiac” and has been “responsible for igniting a new generation of community leaders.”

2019 – Beth Thompson, councillor of Quispamsis for over two decades, co-creator of what has become one of the largest International Women’s Day events in the region, author, food bank volunteer, canvasser, and devoted member of her community.

2018 – Scott Dunlop, an outstanding community volunteer who has worked tirelessly to improve the quality of life for residents of Woodstock and Carleton County. 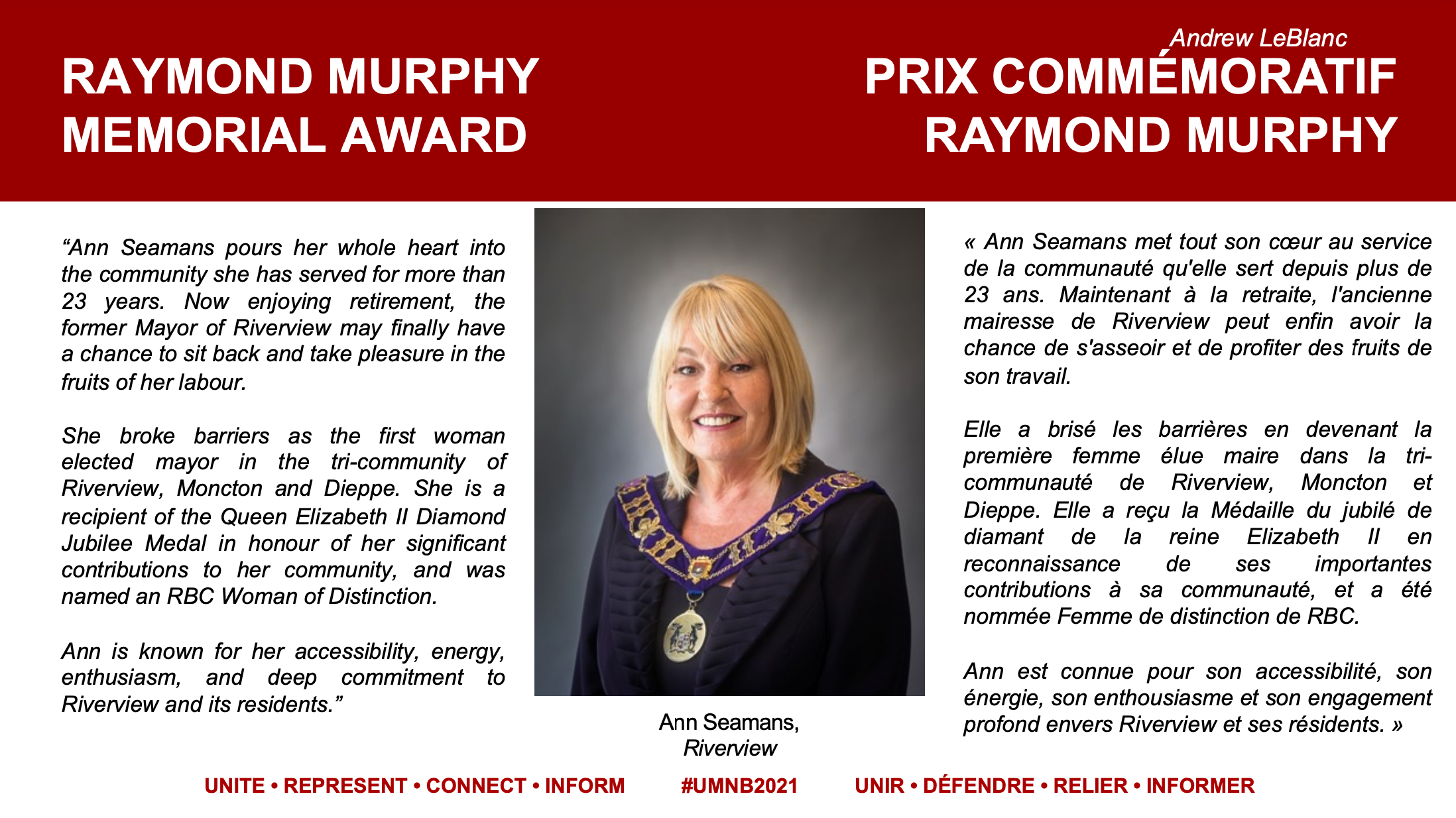 The late Mayor Louise Breau of Millville NB was a person of great integrity and never-ending dedication. She worked diligently for the betterment of municipalities in New Brunswick, without thinking of her own gain. Louise was a reliable, sincere and dynamic person who always had a smile and the time to listen. She was a person who wanted to be involved and would help out in any way, no matter how big or small the effort was on her part. This award is presented annually to an elected official (past or present) with a similar spirit of dedication as Louise.

2021 Recipient:  Robert Lee, councillor of the Village of Centreville. Councillor Lee is an active volunteer firefighter, community volunteer, and he celebrates his 37th consecutive year on council in January 2022. Lee is the longest-serving municipal elected official in New Brunswick.

2020 – Clem Tremblay, Councillor for 18 years and Past Mayor of Dalhousie. A board member and community volunteer, past president of the Dalhousie Lion’s Club and Bon-Ami Festival, manager of the Dalhousie Senior Hockey Team and past president of the New Brunswick Sports Hall of Fame, Clem “represented his town wherever he went with pride… and always greets everyone with a smile and conversation.

2019 – Kenneth Chorley, three-term Mayor of Hampton with 28 years on council known for his accessibility, enthusiasm, and dedication. Chorley is known for his deep love of his community, and has dedicated a large part of his life to making the lives of residents in his community better.

2018 – Emil Olsen, Councillor and former Deputy Mayor of Quispamsis. A volunteer and community servant who has spent his life saying “yes!” when asked to chair yet another committee, “how can I help” when important causes needed time and money, and “let’s get to work” when groups needed his expertise.

2011 – Karen Titus, Mayor/Councillor, Perth-Andover. A teacher, coach in multiple sports, member of the Rotary Club and the Perth-Andover Recreation Commission, Titus was a hard worker in multiple facets of village life. She spent 20 years on municipal council, traveled extensively as President of UMNB, received the Diamond Jubilee Medal, and was inducted to the Perth-Andover Wall of Fame. She is remembered as friendly and fair.

2005 – Burpee Wagner, Councillor and Mayor of Perth-Andover. An industrial arts teacher, and air cadets captain, Wagner was once New Brunswick’s longest-serving mayor at 24 years. Credited with helping to bring the River Valley Civic Centre to fruition, he also served as president of the Grand Falls Regional Development Commission, vice-president of the Federation of Canadian Municipalities, and worked with the Hotel-Dieu Hospital Foundation. “Burpee is always ready to help.”